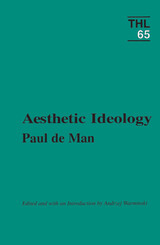 An important reconsideration of ideology by one of this century's most eminent theorists.

This long-awaited volume by one of the major figures of twentieth-century thought represents perhaps the most provocative, serious, and important rethinking of "ideology" since the publication of Althusser's essays in the 1960s and 1970s. Aesthetic Ideology offers the definitive resource to de Man's thoughts on philosophy, politics, and history.

The core of Aesthetic Ideology is a rigorous inquiry into the relation of rhetoric, epistemology, and aesthetics, one that presents radical notions of materiality. De Man reads Kant and Hegel with a combination of philosophical rigor, interpretive pressure, speculative daring, and ironic good humor that is unique to him, ultimately reaching the heart of philosophical aesthetics.

The texts collected here were written or delivered as lectures during the last years of de Man's life, between 1977 and 1983. Many of them have never been available previously in any form; these include essays on Kant's materialism, his relation to Schiller, and the concept of irony. A culmination of de Man's thinking on these central issues, Aesthetic Ideology is a necessary and vital component of your humanities bookshelf.

Andrzej Warminski is professor of comparative literature at the University of California, Irvine. He is the author of Readings in Interpretation (1987) and the forthcoming Material Inscriptions.