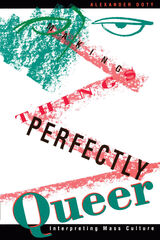 "Making Things Perfectly Queer illuminates both the potential and the limitations of queer theory as praxis in the analysis of mass culture. By weaving together queer theory and popular culture methods, Doty goes where few theorists have gone before. Doty's work offers an engaging discussion of shows seldom explored for their queer moments. This book is important because it illuminates the theoretical problems queerists encounter and creates a blueprint of possibilities for scholars working with similar materials." --Lesbian Review of Books

"The strenght of Doty's writing is his incredible eye for the telling detail-the lines culled from 1940s Jack Benny shows are incridible nuggets of postmodern, found anaylsis--and a pervasive knowledge of popular culture that allows him to wander through film, video, and print materials, finding fragments which he brings back to his theme to construct an essay. What Doty has done is to place these ideas and arguments in a broader, contemporary, theoretical framework that incorporates clearer, more articulated ideas about feminist theory, gay and lesbian liberation." --Cineaste