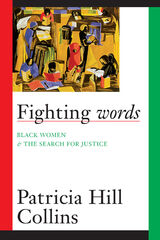 When Black Feminist Thought by Patricia Hill Collins was published in 1990, reviewers called it "remarkable," "rich and valuable," and proclaimed, "with the publication of this book, Black feminism has moved to a new level." Now, in Fighting Words, Collins expands and extends the discussion of the "outsider within" presented in her earlier work, investigating how effectively Black feminist thought confronts the injustices African American women currently face.

Collins takes on a broad range of issues-poverty, mothering, white supremacy and Afrocentrism, the resegregation of American society by race and class, the ideas of Sojourner Truth and how they can serve as a springboard for more liberating social theory. Contrasting social theories that support unjust power relations of race, class, gender, and nation with those that challenge inequalities, Collins investigates why some ideas are granted the status of "theory" while others remain "thought." "It is not that elites produce theory while everyone else produces mere thought," she writes. "Rather, elites possess the power to legitimate the knowledge that they define as theory as being universal, normative, and ideal."

Collins argues that because African American women and other historically oppressed groups seek economic and social justice, their social theories may emphasize themes and work from assumptions that are different from those of mainstream American society, generating new angles of vision on injustice. Collins also puts such oppositional social theory to the test: while the words of these theories may challenge injustice, do the ideas make a difference in the lives of the people they claim to represent?

Throughout, Collins provides an essential understanding of how "outsiders" resist mainstream perspectives, and what the mainstream can learn from such "outsiders." Historically situated yet transcending the specific, Fighting Words provides a new interpretive framework for both thinking through and overcoming social injustice.

"In her perceptive book, Fighting Words, Patricia Hill Collins, a leading scholar in critical theory, argues that intellectuals who break with conventional wisdom are more of a threat to the establishment than their numbers might suggest." Joe R. Feagin in The Chronicle of Higher Education

"Fighting Words is a treatise, if you will, encouraging all black women to engage in dialogue and to reach out to each other, regardless of education, income, or class. Fighting Words is an amazing work in the way it seamlessly combines the histories of black women and feminism. Even more impressive is the way Collins blends her personal experiences as a black woman, educator, and sociologist. Collins is all about telling the truth, now. That is probably why Fighting Words is such a revelation." Black Issues Book Review

"Fighting Words ably demonstrates that Collins is still our leading theorist. Those who understand black women in terms of reductionist categories and who need to read this book probably won't. But it gives the rest of us another sharp implement with which to saw at the ropes." Women's Review of Books

"Collins' exploration of the question, 'What is knowledge?' demonstrates the value of a perspective that brings together the complex interrelationships of race, gender and social ranking. The text is both counter-theoretical and practicalÂ­Â­a readable, persuasive and important source. Highly recommended." The Diversity Factor

"Advances a much needed discussion, beyond feminism and identity politics for black women and, presumably, for women of color generally." National Women's Studies Association Journal

"Hill Collins provides a refreshing new look at theory that is not mired in obscure language but purposely written in multiple languages to welcome a broader audience. By using accessible/inclusive language and drawing on many schools of intellectual thought, she informs and educates across disciplines Â­ a unique characteristic in academia. She delivers a critical and passionate work that is inspiring to a new generation of scholars and renews the spirit of existing scholars." Gender and Society

"Collins has offered an excellent text that helps us understand not only Black feminist thought and its relationship to Black women's experiences, but also how it may help those of us truly working for social justice." Feminist Collections

"This book has many suggestive ideas and well-thought-through social theoretical analyses. In line with her earlier work, Collins continues to argue that group positions generate epistemological standpoints from which people ask and answer questions of social knowledge in different ways. She considers whether recent theories of Black women as having 'intersectional' positions is a better conceptualization of the specific standpoint of Black women. Collins's book offers much to think about and to discuss for those involved in struggles generated by encounters and events beyond theory." Hypatia

"This is a work that is both theoretically rich and yet deeply personal in its expressive voice. Collins points us toward the construction of new critical theoretical approaches that can effectively advance the struggles for social justice. Fighting Words is a powerful and passionate work."

Patricia Hill Collins is Charles Phelps Taft Professor of Sociology in the Department of African American Studies at the University of Cincinnati.