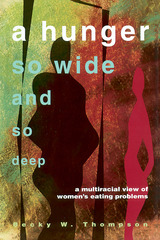 Hunger So Wide And So Deep: A Multiracial View of Women’s Eating Problems
by Becky Thompson
University of Minnesota Press, 1996
Paper: 978-0-8166-2435-5
The first of its kind, A Hunger So Wide and So Deep challenges the popular notion that eating problems occur only among white, well-to-do, heterosexual women. Based on in-depth life history interviews with African-American, Latina, and lesbian women, Becky Thompson's book chronicles the effects of racism, poverty, sexism, acculturation, and sexual abuse on women's bodies and eating patterns. By demonstrating how these girls and women use eating to "make a way outa no way," A Hunger So Wide and So Deep dispels popular stereotypes of anorexia and bulimia as symptoms of vanity and stresses the risks of mislabeling what is often a way of coping with society's own disorders.

With its multicultural focus, this book not only brings women of color and lesbians into our picture of eating problems, but also clears up many demeaning and sexist ideas about these problems among white women. By featuring the creative ways in which women have changed their unwanted eating patterns and regained trust in their bodies and appetites, the author offers a message of hope and empowerment that applies across race, class, and sexual preference.

"Becky W. Thompson has provided a rigorous and impassioned study of eating problems, casting a special light on the experiences of women of color. Linking unhealthy eating patterns to the oppression women suffer in a society both sexist and racist, Thompson breaks new ground and offers hope for the multitudes of women who have swallowed their pain." Evelyn C. White, editor, The Black Women's Health Book

"Thompson is making an important contribution to the field of eating disorders. The diversity of these women's experiences makes it particularly crucial that we hear their perspectives. Thompson's work should help us to reevaluate our assumptions about race, ethnicity, sexism, and violence in the etiology and maintenance of eating problems." Eating Disorders: The Journal of Treatment and Prevention

"In a Hunger So Wide and So Deep, psychologist Becky Thompson refutes this media image of the victims of eating disorders and builds a foundation for an entirely different perception of what causes these diseases. Her results are both surprising and alarming. Thompson argues-quite convincingly-that eating disorders happen most frequently in women of color, lesbians, and women under severe economic distress. Hunger is stuffed full of footnotes and references to statistics, studies, psychological profiles and other data to bolster her well-reasoned argument that eating disorders are most often caused by a post-traumatic stress disorder (PTSD) response to racism, sexism, homophobia and other abuses suffered by women. Thompson's theories are complicated but never murky and are presented in a clearly delineated manner that never deteriorates into academese. Hunger refutes an enormous number of popularly held theories about eating disorders. Thompson's research belies the notion that it is teens and college students who are most at risk for these diseases; according to Thompson's studies, women in their 30s are the most frequent victims of eating disorders. And her most potent find, that non-white, non-heterosexual women are also frequent victims means a total redefinition of what these illnesses are about. Thompson urges a second look at our national obsession with weight and proffers theories and practices that could save the lives of women of all colors and sexual orientations." Lambda Book Report

"A Hunger So Wide and So Deep is a wonderful book: gripping, creative and profoundly humane. In lucid prose Becky Thompson offers an original explanation for women's eating problems. She argues that many women turn to food-bingeing, dieting, purging, or starving- as a sensible means of coping with physical and psychic 'atrocities' deriving from 'racism, sexism, homophobia, classism, the stress of acculturation, and emotional, physical, and sexual abuse.' Thompson breaks new ground by examining the experiences of lesbians, women of color and working-class women. Her inclusive approach produces a serious challenge to the stereotype that eating problems stem primarily from a concern with thinness." Women's Review of Books

"In addition to an excellent analysis of the issues, we get a real sense of each of the women she interviewed. Although well documented and an asset to other researchers, the book is also accessibly written and an important read for anyone who wants to understand more about eating problems and women's bodies." Body Image Task Force Newsletter

"Becky Thompson criticizes current feminist theory on women and eating disorders for utilizing gender almost exclusively as the category of analysis, ignoring race, class, and sexuality. She demonstrates that women of color and women of many classes and sexual orientations can be included in feminist analyses in a more meaningful way than simply saying 'these groups are affected, too'." Feminist Collections

"Thompson's A Hunger So Wide and So Deep provides a bridge between the micro- and macroanalyses of eating disorders. Thompson's is the only study to my knowledge that deals systematically with race and sexualities, and it is this diversity of interviewees as well as Thompson's careful listening that shapes her analysis. More than even the feminist therapists, Thompson allows her interviewees to tell their stories. Most significant, Thompson derives her theory of disturbed eating from the stories the women told, while not reducing the behavior to personal problems." NWSA Journal

"This book offers a message of hope and empowerment across race, class and sexual orientation. This book represents the postmodern challenge to us all: to question the dominant stories and pay attention to each individual's knowledge about her own life. It has been refreshing to read this book and, using these descriptions with others I see, to bring help and vision from one woman to another." Journal of Feminist Family Therapy

Becky W. Thompson is an assistant professor of sociology at the Center for Research on Women at the University of Memphis and coeditor (with Sangeeta Tyagi) of Beyond a Dream Deferred: Multicultural Education and the Politics of Excellence. She is the author of A Promise and a Way of Life: White Antiracist Activism and Mothering without a Compass: White Mother's Love, Black Son's Courage.