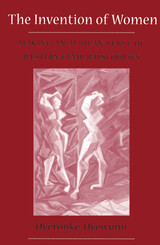 The "woman question," this book asserts, is a Western one, and not a proper lens for viewing African society. A work that rethinks gender as a Western construction, The Invention of Women offers a new way of understanding both Yoruban and Western cultures.

Author Oyeronke Oyewumi reveals an ideology of biological determinism at the heart of Western social categories--the idea that biology provides the rationale for organizing the social world. And yet, she writes, the concept of "woman," central to this ideology and to Western gender discourses, simply did not exist in Yorubaland, where the body was not the basis of social roles.

Oyewumi traces the misapplication of Western, body-oriented concepts of gender through the history of gender discourses in Yoruba studies. Her analysis shows the paradoxical nature of two fundamental assumptions of feminist theory: that gender is socially constructed and that the subordination of women is universal. The Invention of Women demonstrates, to the contrary, that gender was not constructed in old Yoruba society, and that social organization was determined by relative age.

A meticulous historical and epistemological account of an African culture on its own terms, this book makes a persuasive argument for a cultural, context-dependent interpretation of social reality. It calls for a reconception of gender discourse and the categories on which such study relies. More than that, the book lays bare the hidden assumptions in the ways these different cultures think. A truly comparative sociology of an African culture and the Western tradition, it will change the way African studies and gender studies proceed.

"OyewÃ¹mi's book is a departure from the majority of feminist writers on Africa. She goes further to show a society almost unintelligible using the common set of presumptions in feminist literature about how society is organized. Her indignation is real and forceful and her research and lucid presentation admirable." Modern African Studies

"Oyewumi's work is an extremely interesting study that forces readers to rethink some of the accepted notions of colonialism." National Women's Studies Association Journal

Oyeronke Oyewumi is assistant professor in the Department of Black Studies at the University of California, Santa Barbara