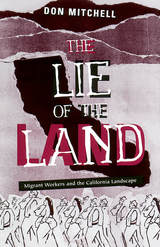 A hard-hitting look at the story behind California's famous scenery.

The beauty of the California landscape is integral to its place in the imagination of generations of people around the world. In The Lie of the Land, geographer Don Mitchell looks at the human costs associated with this famous scenery. Through an account of the labor history of the state, Mitchell examines the material and ideological struggles over living and working conditions that played a large part in the construction of the contemporary California landscape.

The Lie of the Land examines the way the California landscape was built on the backs of migrant workers, focusing on migratory labor and agribusiness before World War II. The book relates the historical geography of California to the processes of labor that made it, discussing not only significant strikes but also on the everyday existence of migrant workers in the labor camps, fields, and "Hoovervilles" where they lived. Mitchell places class struggle at the heart of social development, demonstrating concretely how farm workers affected their social and material environment, as well as exploring how farm owners responded to their workers' efforts to improve their living and working conditions. Mitchell also places "reformers" in context, revealing the actual nature of their role in relation to migrant workers' efforts-that of undermining the struggle for genuine social change. In addition, this volume captures the significance of the changing composition of the agricultural workforce, particularly in racial terms, as the class struggle evolved over a period of decades.

Mitchell has written a narrative history that describes the intimate connection between landscape representations and the material form of geography. The Lie of the Land places people squarely in the middle of the landscapes they inhabit, shedding light on the complex and seemingly contradictory interactions between progressive state agents, radical workers, and California growers as they seek to remake the land in their own image.

"It is important that the story of the migrant workers is told and Mitchell tells it well." Transactions/Area

"The Lie of the Land opens up new and rich possibilities to help prod our thinking about the processes involved in understanding the changing morphology of landscape. This is an important book. Mitchell's lucid examination of the role of migrant workers in shaping and reshaping California's agricultural landscapes brings new meaning to the creation of the sometimes sublime, yet always complex, rural landscapes in places like the Salinas Valley, the Central Valley, and the Imperial Valley. For many historical geographers and others fortunate enough to read this book, the vision and study of landscape evolution will never be the same." Historical Geography

"For anyone wishing to go beyond such movies and novels that do address Californian labour history before the Second World War, this is an excellent integration of all too often disparate approaches and materials. It should be required reading far beyond the confines of labour history." Labour History Review

"The Lie of the Land is an important contribution to the study of landscape, to cultural geography, and more generally to critical geography. The book should be held up as a model for students and researchers in the field." Environment & Planning A

"In The Lie of the Land, Don Mitchell represents a new, interdisciplinary, cultural geography, using such disparate fields as art history and labor history. He looks at migrant workers in California from the Wheatland riot of 1913 to the Bracero Program of 1942." Western Historical Quarterly

"What he discovers is that the image of California as an agricultural Eden, as initially witnessed by John Steinbeck's Joad family in The Grapes of Wrath, never matches the reality of a land that is tightly controlled by corporate growers, a land that exploits the labor of waves of migratory workers from the late 19th century on. Mitchell looks behind the pastoral charm of fertile fields and neatly tended farmhouses to reveal the brutal working conditions and squalid living conditions of the migratory camps. Along the way, he acquaints the reader with a century of labor history and the fact that Anglos, Filipinos, Japanese and Chicanos have all taken their turn at working--and fighting against--the California agricultural landscape."

Journal of the West

"Mitchell, who teaches geography at the University of Colorado at Boulder, describes the labor struggles of the migrants with clarity and grace. The Lie of the Land is, in many ways, a valuable contribution to the study of California labor relations." Los Angeles Reader

"Amidst the array of studies about California agriculture, geographer Don Mitchell offers a singular analysis. His study is a carefully researched and closely reasoned interpretation of the interaction between the place, the people, and the agricultural plenitude which together, he contends, have contributed to the evolving morphology of the California landscape." Agricultural History

Don Mitchell is assistant professor of geography at the University of Colorado at Boulder.