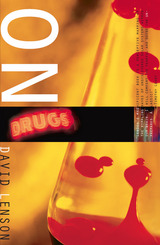 In a searing critique of the War on Drugs and other attempts to eradicate "getting high," Lenson ventures outside the conventional genres of drug writing and looks at the drug debate from a lost, and often forbidden, point of view: the user's. Walking a fine line between the antidrug hysteria prevalent in our culture and an uncritical advocacy of drug use, he describes in provocative detail the experiences and dynamics of drugs of pleasure and desire.

"Drug epicurean David Lenson claims the 'Just Say No' campaign of the Reagan years was an attempt to explicitly end rational discourse on the subject. The man's own whacked-out but brilliant 'discourse,' On Drugs makes philosophical points about narcotics that also apply to java and hooch. Lenson argues that once all mood-altering substances are eliminated, sobriety becomes a meaningless term." --Voice Literary Supplement

"On Drugs is heterodox and iconoclastic to the core."--Boston Phoenix

"In the national debate and reevaluation of attitudes toward drugs, this is a different kind of contribution, one that is speculative, discursive, and visionary." --Library Journal

"Lenson's magnificent book is a perceptive mapping of the rippling waves of undiscovered solar systems within our brain. It will comfort the fearful and guide the unprepared. A classic!" --Timothy Leary

"Lenson analyzes our culture's love-hate relationship with mood-altering substances from the user's point of view in On Drugs. He writes about the differences between 'drugs of desire' (mainly cocaine, crack, and speed) and 'drugs of pleasure' (mainly marijuana and hallucinogens. The former he sees as reflecting the main ideology of Western culture--consumerism--in that frequent users tend to fixate on acquiring more to the exclusion of everything else, while the latter tend to interdict the consumerist mind-set by letting users savor everyday activities and objects already at hand." --Utne Reader

"The best work I've read on drugs comes from outside the cultural studies-loop. In his remarkable On Drugs, David Lenson, who teaches comparative literature at the University of Massachusetts at Amherst, uses a phenomenological approach to describe the effects of various drugs. What does it feel like to be high on pot, coke, LSD? What, if anything, is to be gained from them? What are the costs? What attracts individuals to different drugs? One of Lenson's theses, brilliant and controversial, is that some kinds of drugs deliver us from the consumer world view into realms of contemplation--and are officially despised in part for doing so. What the guardians of official culture cannot tolerate, Lenson suggests, is any form of consciousnes that rises above getting and spending. What are we to do about the drug crisis? Lenson's advice is invaluable: Throw words at it, he says, lots of words. We need to use the cultural-studies movement to break the intellectual and classroom silence on drugs. We need to re-educate ourselves about drugs, and in so doing help educate our students." --Chronicle of Higher Education

David Lenson is professor of comparative literature at the University of Massachusetts, Amherst. He is also a rock and blues musician who has played saxophone with John Lee Hooker, Buddy Guy, and Junior Wells.