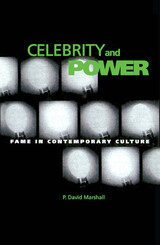 Celebrity And Power: Fame and Contemporary Culture
by P. David Marshall
University of Minnesota Press, 1997
Paper: 978-0-8166-2725-7
The celebrity is an ambiguous figure in contemporary culture. Simultaneously celebrated and denigrated, stars represent not only the embodiment of success, but also the ultimate construction of false value. They are a peculiar form of public subjectivity that negotiates the tension between a democratic culture of access and a consumer capitalist culture of excess. Celebrity and Power examines this dynamic, questioning the cultural forces behind our need to become endlessly embroiled with the construction and collapse of celebrities.Through detailed analysis of figures from Tom Cruise to Oprah Winfrey to the commercial pop music sensation New Kids on the Block, author and cultural critic P. David Marshall investigates the general public’s desire to associate with celebrity. He examines various kinds of stars, questioning the needs each type fulfills in our lives and relating these needs to particular entertainment media. Marshall asks why enigmatic, distant stars populate the silver screen while television constructs approachable “everyman” figures and popular music features audience-identified celebrity personalities. He looks at the significance of stars who amass cultlike followings as well as those who appear to prompt outright rejection.Celebrity and Power identifies the forces that have enveloped the development of democratic culture and their partial resolution through a redefined public sphere populated by celebrities. Marshall argues that the new concern with the masses that characterizes modern capitalism promotes figures who can be seen as part of the crowd but who are articulated as individuals. As such, they provide a model of self-differentiation that furthers an economy in which product consumption is thought to bestow individualism and personality.Bridging the fields of media studies, film studies, communications, and popular culture, Marshall’s volume is a unique resource for students and researchers in all of these disciplines as well as for the general reader.P. David Marshall is director of the Media and Cultural Studies Centre in the Department of English, University of Queensland in Australia.