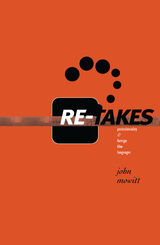 Exploring several dimensions of the problem of "film languages," this volume engages the complications inherent in the study of the "other" and investigates the intricate relationship between postcoloniality, national identity, ideology, and filmmaking. Author John Mowitt establishes how Eurocentrism sustains both the concept of the foreign language film and the flawed initiative of multiculturalism. Using bilingualism and the concept of foreign film language, Re-takes pushes film studies beyond both linguistics and psychoanalysis to resituate is within the networks of global cultural communication.Through close readings of the bilingual films of Senegalese filmmaker Sembene Ousmane and Bolivian filmmaker Jorge Sanjines, Mowitt articulates the poetics and politics of postcoloniality in the global cinematic field, and challenges film studies to reflect on the relation between its organizing analytical distinctions - national and foreign, textual and institutional - and its position within globalization. Examining how elements involved in bilingual films have implications for the way academic intellectuals classify and misappropriate cultural forms, Re-takes is a provocative intervention into ongoing discussions of the changing nature of film and media studies.
AUTHOR BIOGRAPHY
John Mowitt is professor of cultural studies and comparative literature at the University of Minnesota. He is a senior editor of the journal Cultural Critique and the author of Text: The Genealogy of an Antidisciplinary Object and Percussion: Drumming, Beating, Striking.
TABLE OF CONTENTS