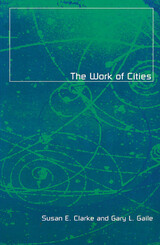 Are cities obsolete relics of an earlier era? In this pathbreaking book, Susan E. Clarke and Gary L. Gaile contend that contrary to this conventional wisdom, cities are growing in importance. Far from irrelevant, local governments are vital political arenas for the new work of cities--empowering their citizens to adapt and serve as catalysts for the global economy.

Using Robert Reich's The Work of Nations as a point of departure, the authors argue that globalism, coupled with increasing disparities of wealth and power, changes not only the work of nations but also the role of communities. Clarke and Gaile begin by detailing the transformation of the United States to a postindustrial economy situated in a "global web." They then examine the emergence of local entrepreneurial policy choices in the context of economic and political restructuring and in the absence of federal resources.

Using empirical data to test assumptions about what leads cities to choose new policies, Clarke and Gaile explore local context through four case studies: Cleveland, Tacoma, Syracuse, and Jacksonville. They discuss human capital as the linchpin of globalization, arguing that analytical ability, information skills, and the capacity to innovate are all key to wealth creation. In conclusion, they contend that inattention to the decline in human and social capital will ultimately undermine any local development efforts--unless local policymakers craft responses to globalization that integrate rather than isolate citizens.

The Work of Cities is both bold and nuanced, pragmatic yet compassionate in its recommendations. It is essential reading for anyone who cares about the fate of our metropolitan communities and the people who live there.

"Susan E. Clarke and Gary L. Gaile have written an interesting and provocative account of U.S. cities' past, present, and future as agents of local economic development. Clarke and Gaile contend that cities are vital political arenas for the new work of citiesÂ­promoting citizenship and building the human capital and local links necessary for cities to compete in the postindustrial global economy. Stimulating and useful, it should be widely read among urbanists in political science and other disciplines." American Political Science Review

"This is a terrifically interesting book." Growth and Change: A Journal of Urban and Regional Policy

"This book is an ambitious and effective discussion of the economic development of cities in a globalised economic context in which information strategies are more important than tax incentives in luring businesses, and within which a new 'localism' has emerged as a paradoxical aspect of development practice. The significance of this work lies in its ability to link an important theoretic argument (globalization) with an increasingly vital arena of practice (urban economic development). It has the potential of recasting both the empirical and the theoretical work on urban development, as it suggests new ways of understanding local decision-making within a global context. The authors deserve credit for keeping focus. They succeed." Urban Studies

"Clarke and Gaile have put together a provocative analysis of contemporary economic development issues facing cities in the United States. The most convincing feature of the book is its critical treatment of globalization and the clarity of thought it brings to bear upon debates surrounding the 'new localism.'" Economic Geography

"Clarke and Gaile succinctly and clearly describe the economic development activities of U.S. cities for the past 15 years. In addition, they examine how globalization may be transforming these practices.The material examines changing economic development practices and the role of government in a way no other book to date has. It is broadly and well written so both practitioners and academics would find the book topical." Journal of American Planning Association

"Both bold and nuanced, practmatic yet compassionate in its recommendations. It is essential reading for anyone who cares about the fate of our metropolitan communities and the people who live there. A path-breaking book" Bulletin of Science, Technology & Society