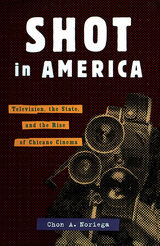 Shot In America: Television, the State, and the Rise of Chicano Cinema
by Chon A. Noriega
University of Minnesota Press, 2000
Paper: 978-0-8166-2931-2
Redefines media history through Chicano film and television.

One of the most influential figures in ethnic media studies takes direct aim at how Chicano filmmaking has been represented in the history of media in the United States. Shot in America tackles seemingly intractable dilemmas involving the political and market functions of film and TV to provide a definitive response to the debates over cultural and racial identity that have embroiled media and cultural studies over the past two decades.

Noriega offers a compelling and detailed description of an enormous body of work by Chicano media makers against the backdrop of Chicano social movements, politics, and activism over a forty-year period-an extraordinary exposition of the civil rights movement, media reform activities, and public affairs programming that constitutes the prehistory of independent and minority cinemas.

Noriega reveals the ways in which Chicano and other minority protests both emerged within and were regulated by the very institutions that excluded them. Shot in America is a study with broad implications for our understanding of cultural politics and the entertainment industries.

"This comprehensive study has broad implications for our understanding of cultural politics and the entertainment industries." Hispanic Outlook

"A substantial contribution to the study of Chicano cinema, broadcast policy, and cultural politics in the United States." Film Quarterly

Chon A. Noriega is associate professor of critical studies in the Department of Film and Television at UCLA. His books include Chicanos and Film (1992), The Ethnic Eye (1996), and Visible Nations(2000).