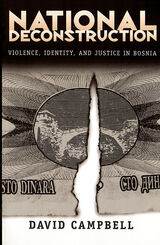 How did Bosnia, once a polity of intersecting and overlapping identities, come to be understood as an intractable ethnic problem? David Campbell pursues this question--and its implications for the politics of community, democracy, justice, and multiculturalism--through readings of media and academic representations of the conflict in Bosnia. National Deconstruction is a rethinking of the meaning of "ethnic/nationalist" violence and a critique of the impoverished discourse of identity politics that crippled the international response to the Bosnian crisis.

Rather than assuming the preexistence of an entity called Bosnia, Campbell considers the complex array of historical, statistical, cartographic, and other practices through which the definitions of Bosnia have come to be. These practices traverse a continuum of political spaces, from the bodies of individuals and the corporate body of the former Yugoslavia to the international bodies of the world community.

Among the book's many original disclosures, arrived at through a critical reading of international diplomacy, is the shared identity politics of the peacemakers and paramilitaries. Equally significant is Campbell's conclusion that the international response to the Bosnian war was hamstrung by the poverty of Western thought on the politics of heterogeneous communities. Indeed, he contends that Europe and the United States intervened in Bosnia not to save the ideal of multiculturalism abroad but rather to shore up the nationalist imaginary so as to contain the ideal of multiculturalism at home.

By bringing to the fore the concern with ethics, politics, and responsibility contained in more traditional accounts of the Bosnian war, this book is a major statement on the inherently ethical and political assumptions of deconstructive thought-and the reworkings of the politics of community it enables.

David Campbell is professor of international politics at the University of Newcastle, UK, and the author of Writing Security.