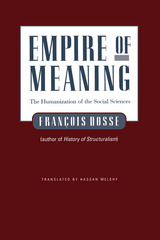 Empire Of Meaning: The Humanization Of The Social Sciences
by Francois Dosse
University of Minnesota Press, 1998
Cloth: 978-0-8166-2964-0
After the brilliance of Derrida, Foucault, Barthes--what? By most accounts, the French intellectual scene, poststructuralism, has split in two. On one side, a few select philosophers as media stars are pressed for their opinions on virtually every subject; on the other side, an atomized community of scholars in the social sciences are bound up in technicalities and muffled by the lack of a common language. This great divide, Francois Dosse contends, augurs a tremendous change in the structure and conduct of intellectual life. What this shift means--how it has occurred and what parts various thinkers have played in shaping it--is the subject of Empire of Meaning.

An outgrowth of Dosse's magisterial History of Structuralism, Empire of Meaning is an extended encounter with some of the most influential French intellectuals. Through interviews and readings, Dosse reveals what has become of the intellectuals of the generation of '68 as they have tried to work out the implications of their revolt against structuralism and the problem of Cold War existence. Paul Ricoeur, Bruno Latour, Isabelle Stengers, Roger Chartier, Marcel Gauchet, Dany-Robert Dufour, and Michel Serres are among the many figures whose words and work unfold in these pages.

A thorough and thoroughly engrossing work of intellectual history, Empire of Meaning is a firsthand look at the reshaping of French intellectual life in our time.

"For the reader seeking rich historical detail, including names, places, schools, and research agendas, Empire of Meaning proves a veritable gold mine of information. The territory covered by Dosse is vast and impressive; the detail of his surveillance is overwhelming." --Rhetoric & Public Affairs

"Dosse reveals a new paradigm that might make us forget the great old ones: functionalism, structuralism, and Marxism. . . . Decidedly, this book is full of good news." --Le Nouveau Politis

"The immediate history of ideas is an undertaking as daring as it is risky, and Dosse here forces the relationships of trajectory and thought. . . . This book offers, in a very readable way, an overview of the current research in the social sciences." --Le Monde

Francois Dosse is a historian and author of numerous books, including History of Structuralism, Volume 1 and Volume 2.