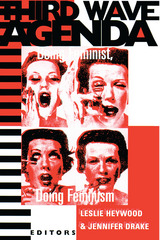 Third Wave Agenda: Being Feminist, Doing Feminism
by Leslie Heywood
contributions by Jennifer Drake
University of Minnesota Press, 1997
Paper: 978-0-8166-3005-9
Young feminists have grown up with a plethora of cultural choices and imagesÂ­Â­in the distance from Gloria Steinem to Courtney Love, a chasm has been traversed and an entire history made. In Third Wave Agenda, feminists born between the years 1964 and 1973 discuss the things that matter now, both in looking back at the accomplishments and failures of the past and in planning for the challenges of the future.

The women and men writing here are activists, teachers, cultural critics, artists, and journalists. They distinguish themselves from a group of young, conservative feminists, including Naomi Wolf and Katie Roiphe, who criticize second wave feminists and are regularly called on to speak for the "next generation" of feminism. In contrast, Third Wave Agenda seeks to complicate our understanding of feminism by not only embracing the second wave critique of beauty culture, sexual abuse, and power structures, but also emphasizing ways that desires and pleasures such as beauty and power can be used to enliven activist work, even while recognizing the importance of maintaining a critique of them.

Combining research, theory, and social practice with an autobiographical style, these writers are hard at work creating a new feminism that draws on the submerged histories of other feminisms--black feminism, "womanism," and working-class feminism, among others. Some topics explored in Third Wave Agenda include feminism in popular music, interracial coalitions, and tensions between individual ambitions and collective action.

"Yes, the volume's strong thinkers are eager to refine and reshape the feminism they were raised on-and that they're sometimes frustrated with-but they're determined to do so without disregarding its tremendous positive influence. These girls have theory and they know how to use it-while having a good time, of course." --Bitch: Feminist Response to Pop Culture

"It is clear from the analyses of popular culture and the personal narratives combined in this collection that feminism continues to find a place in the mainstream of American culture; it is not confined to the ivory tower or the esoteric debates of feminist theorists." --Composition Studies

Part I: What is the Third Wave? Third Wave Cultural Contexts

We Learn America like a Script: Activism in the Third Wave; or, Enough Phantoms of Nothing, Leslie Heywood and Jennifer Drake

Reading between the Waves: Feminist Historiography in a "Postfeminist" Moment, Deborah L. Siegel

Hues Magazine: The Making of a Movement, Tali Edut with Dyann Logwood and Ophira Edut

Deconstructing Me: On Being (Out) in the Academy, Carol Guess

Feminism and a Discontent, Lidia Yukman

Leslie Heywood is assistant professor at the State University of New York at Binghamton, where she teaches gender and cultural studies and twentieth-century literature. She is the author of several books, including Built to Win (2003), Pretty Good for a Girl (2000), and Bodymakers (1998).