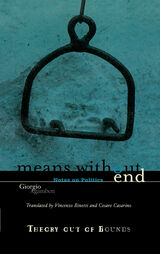 An essential reevaluation of the proper role of politics in contemporary life. In this critical rethinking of the categories of politics within a new sociopolitical and historical context, the distinguished political philosopher Giorgio Agamben builds on his previous work to address the status and nature of politics itself. Bringing politics face-to-face with its own failures of consciousness and consequence, Agamben frames his analysis in terms of clear contemporary relevance. He proposes, in his characteristically allusive and intriguing way, a politics of gesture—a politics of means without end.Among the topics Agamben takes up are the "properly" political paradigms of experience, as well as those generally not viewed as political. He begins by elaborating work on biopower begun by Foucault, returning the natural life of humans to the center of the polis and considering it as the very basis for politics. He then considers subjects such as the state of exception (the temporary suspension of the juridical order); the concentration camp (a zone of indifference between public and private and, at the same time, the secret matrix of the political space in which we live); the refugee, who, breaking the bond between the human and the citizen, moves from marginal status to the center of the crisis of the modern nation-state; and the sphere of pure means or gestures (those gestures that, remaining nothing more than means, liberate themselves from any relation to ends) as the proper sphere of politics. Attentive to the urgent demands of the political moment, as well as to the bankruptcy of political discourse, Agamben’s work brings politics back to life, and life back to politics.Giorgio Agamben teaches philosophy at the Collège International de Philosophie in Paris and at the University of Macerata in Italy. He is the author of Language and Death (1991), Stanzas (1992), and The Coming Community (1993), all published by the University of Minnesota Press.