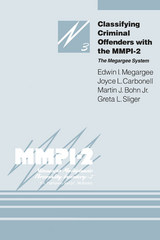 
Originally developed in the 1970s and now revised for the MMPI-2, the Megargee System provides a method for classifying criminal offenders into groups based on their MMPI-2 profiles. This empirically derived system has been investigated in a wide variety of criminal justice settings including corrections, probation, and parole. It has been tested in minimum, medium, and maximum federal, state, and military correctional institutions, in local jails, in halfway houses, and in forensic mental health units. Its use has been extended to female offenders, older men, and juvenile delinquents. Integrating thirty years of research, this new resource fully evaluates the reliability, validity, sources, and uses of the Megargee system.

Classifying Criminal Offenders with the MMPI-2 describes how the system was originally derived and validated and gives instructions on how to classify the original MMPI and MMPI-2 profiles of male and female criminal offenders. It integrates the findings of more than one hundred independent studies with previously unpublished original research investigating the characteristics of each of the system's empirically derived male and female types. On the basis of these data, the authors recommend the optimal settings, change agents, and treatment programs for each type of offender.

As the basic reference work on the MMPI-2 Megargee system, this volume will be an essential resource for criminal justice practitioners, psychologists interested in the MMPI-2, and researchers in criminal classification and personality assessment.