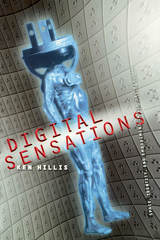 Considers the cultural and philosophical assumptions underlying virtual reality, and how the technology affects the real world.

Virtual reality is in the news and in the movies, on TV and in the air. Why is the technology--or the idea--so prevalent precisely now? What does it mean--what does it do--to us? Digital Sensations looks closely at the ways representational forms generated by communication technologies--especially digital/optical virtual technologies--affect the "lived" world.

Virtual reality, or VR, is a technological reproduction of the process of perceiving the real; yet that process is "filtered" through the social realities and embedded cultural assumptions about human bodies, perception, and space held by the technology's creators.

Through critical histories of the technology--of vision, light, space, and embodiment--Ken Hillis traces the various and often contradictory intellectual and metaphysical impulses behind the Western transcendental wish to achieve an ever more perfect copy of the real. Because virtual technologies are new, these histories also address the often unintended and underconsidered consequences--such as alienating new forms of surveillance and commodification--flowing from their rapid dissemination. Current and proposed virtual technologies reflect a Western desire to escape the body, Hillis says.

Exploring topics from VR and other, earlier visual technologies, Hillis's penetrating perspective on the cultural power of place and space broadens our view of the interplay between social relations and technology.

"His discussion is ambitious; not only does he bring together multiple disciplines and philosophies, he traces history from the Renaissance to the present." --Technical Communication Quarterly

"Ken Hillis has written a wise interrogation of the impact of virtual environments and the marriage of new digital and visual technologies. Carefully balancing between the dangers of all-too-common and too-easy skepticism and the risk of being seduced by the new medium, this book analyses the manner in which the use of technologies to produce virtual environments (VEs) changes the bases on which assumptions concerning democratic politics and identity flourish." --Space and Culture

Ken Hillis is assistant professor in the Department of Communication Studies and adjunct professor of geography at the University of North Carolina at Chapel Hill.