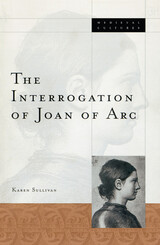 A radical reassessment of the trial of Joan of Arc that gives a new sense of Joan in her time.

The transcripts of Joan of Arc's trial for heresy at Rouen in 1431 and the minutes of her interrogation have long been recognized as our best source of information about the Maid of Orleans. Historians generally view these legal texts as a precise account of Joan's words and, by extension, her beliefs. Focusing on the minutes recorded by clerics, however, Karen Sullivan challenges the accuracy of the transcript. In The Interrogation of Joan of Arc, she re-reads the record not as a perfect reflection of a historical personality's words, but as a literary text resulting from the collaboration between Joan and her interrogators.

Sullivan provides an illuminating and innovative account of Joan's trial and interrogation, placing them in historical, social, and religious context. In the fifteenth century, interrogation was a method of truth-gathering identified not with people like Joan, who was uneducated, but with clerics, like those who tried her. When these clerics questioned Joan, they did so as scholastics educated at the University of Paris, as judges and assistants to judges, and as pastors trained in hearing confessions.

The Interrogation of Joan of Arc traces Joan's conflicts with her interrogators not to differing political allegiances, but to fundamental differences between clerical and lay cultures. Sullivan demonstrates that the figure depicted in the transcripts as Joan of Arc is a complex, multifaceted persona that results largely from these cultural differences. Discerning and innovative, this study suggests a powerful new interpretive model and redefines our sense of Joan and her time.

"This compact new book by Karen Sullivan is cause for considerable enthusiasm. Sullivan's fresh readings of key points in the condemnation trial of Joan of Arc of 1431 make a clear case for the enhanced understanding afforded by the application of theoretical constructs to well-known documents such as the transcripts of the Rouen trial. Her incontestable accomplishment is to lay bare the various strands of the inquisitorial mindset." Arthuriana

"Sullivan's juxtaposition of medieval and modern interrogation techniques is eerily illuminating. Sullivan's main conclusion is that two irreducibly opposed cultures confronted each other in Joan's trial: learned and popular, written and oral, clerical and lay, Latin and vernacular. Nothing in Sullivan's careful construction of her case for opposed cultures and discourses prepares us for her chilling conclusion: that Joan finally yielded to her interrogators and 'started accepting the truth as they had always wanted her to accept it'. Sullivan refers here not to Joan's recantation, a week before her death, which she revoked within days, but to her frame of mind throughout that final week. Against the-comforting-orthodoxy that after the revocation Joan reaffirmed the convictions she had maintained during her trial, Sullivan argues that her revocation was only partial, that in the end she surrendered. This is the most impressive part of an arresting book. It is also the bit that matters most." London Review of Books

Karen Sullivan is assistant professor of literature at Bard College.