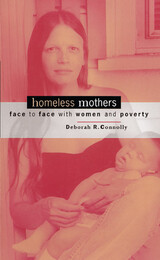 A first-person look at the challenges and cultural perceptions confronting homeless women.

Homeless Mothers follows the lives of mothers on the margins and asks where they fit in the increasingly black-and-white model of motherhood set up by society. Their voices, so rarely heard and so often ignored, resonate throughout this book. Both an anthropologist in the field and a social worker on the job, Deborah R. Connolly is ideally placed to draw out these women's life stories. Using their own words, by turns eloquent and awkward, poignant and harsh, she maps the perilous territory between the promise of childhood and the hard reality of motherhood on the street. What emerges is a glimpse of the cultural, class, gender, and economic challenges these women experience, a glimpse as real for us as the headlines and stereotypes that so often displace homeless mothers and consign them to silence.

"Connolly explores in rich detail the day-to-day experiences of women who use family shelters. Homeless Mothers is an insider's view on poverty and homelessness from the standpoint of mothers, families, and the social service providers who work with them. Connolly uses ethnographic methods and skills worthy of a good fiction writer to portray the daily lives, struggles, and intricate negotiations of homeless mothers." --Housing Studies

Deborah R. Connolly is an advocate for the homeless and a senior research associate at Edgewood Center for Children and Families in San Francisco. She recently taught cultural anthropology at the University of Missouri, Kansas City.