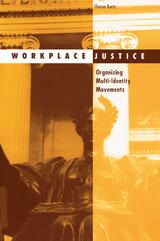 In 1991, Columbia University's one thousand clerical workers launched a successful campaign for justice in their workplace. This diverse union-two-thirds black and Latina, three-fourths women-was committed to creating an inclusive movement organization and to fighting for all kinds of justice. How could they address the many race and gender injustices members faced, avoid schism, and maintain the unity needed to win? Sharon Kurtz, an experienced union activist and former clerical worker herself, was welcomed into the union and pursued these questions. Using this case study and secondary studies of sister clerical unions at Yale and Harvard, she examines the challenges and potential of identity politics in labor movements.

With the Columbia strike as a point of departure, Kurtz argues that identity politics are valuable for mobilizing groups, but often exclude members and their experiences of oppression. However, Kurtz believes that identity politics should not be abandoned as a component in building movements, but should be reframed--as multi-identity politics. In the end she shows an approach to organizing with great potential impact not only for labor unions but for any social movement.

Sharon Kurtz is associate professor of sociology at Suffolk University in Boston.