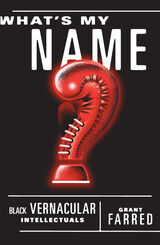 Whom does society consider an intellectual and on what grounds? Antonio Gramsci’s democratic vision of intelligence famously suggested that “all men are intellectuals,” yet within academic circles and among the general public, intellectuals continue to be defined by narrow, elite criteria.

In this study of four celebrated citizens of the African diaspora—American boxer Muhammad Ali, West Indian Marxist critic C. L. R. James, British cultural theorist Stuart Hall, and Jamaican musician Bob Marley—Grant Farred develops a new category of engaged thinker: the vernacular intellectual. Extending Gramsci’s concept of the organic intellectual, Farred conceives of vernacular intellectuals as individuals who challenge social injustice from inside and outside traditional academic or political spheres. Muhammad Ali, for example, is celebrated as much for his dazzling verbal skills and courageous political stands as for his pugilistic talents; Bob Marley’s messages of liberation are as central to his popularity as his lyrical and melodic sophistication. Neither man is described as an intellectual, yet both perform crucial intellectual functions: shaping how people see the world, oppose hegemony, and understand their own history. In contrast, the careers of C. L. R. James and Stuart Hall reflect a dynamic blend of the traditional and the vernacular. Conventionally trained and situated,  James and Hall examine racism, history, and the lasting impact of colonialism in ways that draw on both established scholarship and more popular cultural experiences.

Challenging existing paradigms, What’s My Name offers an expansive and inclusive vision of intellectual activity that is as valid and meaningful in the boxing ring, the press conference, and the concert hall as in academia.