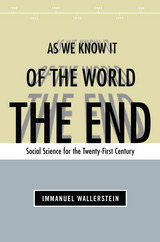 End of the World as We Know It: Social Science for the Twenty-First Century
by Immanuel Wallerstein
University of Minnesota Press, 2001
Paper: 978-0-8166-3398-2
A respected thinker points the way ahead.

"Immanuel Wallerstein has long conceived of social science grandly. He was an innovator of world systems analysis, which portrays societies, sectors within societies, and the very disciplines of the social science as linked, bound, and analytically inseparable: To parse them is to misconceive them. As recent president of the International Sociological Association (1994 to 1998), Wallerstein continued to develop such grand thinking through numerous addresses on the state of the social sciences, capitalism, political justice, and the world. Here, he offers these collectively. He divides them into two topics-the world of capitalism and the world of knowledge. Toward both grand worlds, his thesis is similar: they are in crisis. . . . The scope of his career's thought is remarkable, his expertise impressively broad." Political Science Quarterly

This book is nothing short of a state-of-the-world address, delivered by a scholar uniquely suited to the task. Immanuel Wallerstein, one of the most prominent social scientists of our time, documents the profound transformations our world is undergoing. With these transformations, he argues, come equally profound changes in how we understand the world.

Wallerstein divides his work between an appraisal of significant recent events and a study of the shifts in thought influenced by those events. The book's first half reviews the major happenings of recent decades--the collapse of the Leninist states, the exhaustion of national liberation movements, the rise of East Asia, the challenges to national sovereignty, the dangers to the environment, the debates about national identity, and the marginalization of migrant populations. Wallerstein places these events and trends in the context of the changing modern world-system as a whole and identifies the historical choices they put before us.

The second half of the book takes up current issues in the world of knowledge--the vanishing faith in rationality, the scattering of knowledge activities, the denunciation of Eurocentrism, the questioning of the division of knowledge into science and humanities, and the relation of the search for the true and the search for the good. Wallerstein explores how these questions have arisen from larger social transformations, and why the traditional ways of framing such debates have become obstacles to resolving them. The End of the World As We Know It concludes with a crucial analysis of the momentous intellectual challenges to social science as we know it and suggests possible responses to them.

Immanuel Wallerstein is Distinguished Professor of Sociology and director of the Fernand Braudel Center at Binghamton University. Among his numerous books are The Modern World-System (1974, 1980, 1989), Unthinking Social Science (1991), and After Liberalism (1995).
TABLE OF CONTENTS