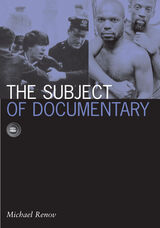 The documentary, a genre as old as cinema itself, has traditionally aspired to objectivity. Whether making ethnographic, propagandistic, or educational films, documentarians have pointed the camera outward, drawing as little attention to themselves as possible. In recent decades, however, a new kind of documentary has emerged in which the filmmaker has become the subject of the work. Whether chronicling family history, sexual identity, or a personal or social world, this new generation of nonfiction filmmakers has defiantly embraced autobiography. In The Subject of Documentary, Michael Renov focuses on how documentary filmmaking has become an important means for both examining and constructing selfhood. By looking at key figures in documentary filmmaking as well as noncanonical video art and avant-garde artists, Renov broadens the definition of what counts as documentary, and explores the intersection of the personal and political, considering how memory can create a way into asking troubling questions about identity, oppression, and resiliency. Offering historical context for the explosion of personal nonfiction filmmaking in the 1980s and 1990s, Renov analyzes films in which the subjectivity of the filmmaker is expressly defined in relation to political struggle or historical trauma, from Haskell Wexler's Medium Cool to Jonas Mekas's Lost, Lost, Lost. And, looking beyond the traditional documentary, Renov contemplates such nontraditional modes of autobiographical practice as the essay film, the video confession, and the personal Web page.Unique in its attention to diverse expressions of personal nonfiction filmmaking, The Subject of Documentary forges a new understanding of the heightened role and function of subjectivity in contemporary documentary practice.Michael Renov is professor of critical studies at the USC School of Cinema-Television. He is the editor of Theorizing Documentary and the coeditor of Resolutions: Contemporary Video Practices (Minnesota, 1996) and Collecting Visible Evidence (Minnesota, 1999).
TABLE OF CONTENTS