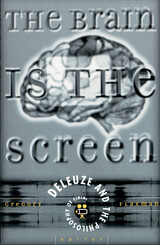 The first broad-ranging collection on Deleuze’s essential works on cinema. In the nearly twenty years since their publication, Gilles Deleuze’s books about cinema have proven as daunting as they are enticing—a new aesthetics of film, one equally at home with Henri Bergson and Wim Wenders, Friedrich Nietzsche and Orson Welles, that also takes its place in the philosopher’s immense and difficult oeuvre. With this collection, the first to focus solely and extensively on Deleuze’s cinematic work, the nature and reach of that work finally become clear. Composed of a substantial introduction, twelve original essays produced for this volume, and a new English translation of a personal, intriguing, and little-known interview with Deleuze on his cinema books, The Brain Is the Screen is a sustained engagement with Deleuze’s cinematic philosophy that leads to a new view of the larger confrontation of philosophy with cinematic images.Contributors: Éric Alliez, U of Vienna; Dudley Andrew, U of Iowa; Peter Canning; Tom Conley, Harvard U; András Bálint Kovács, ELTE U, Budapest; Gregg Lambert, Syracuse U; Laura U. Marks, Carleton U; Jean-Clet Martin, Collége International de Philosophie, Paris; Angelo Restivo; Martin Schwab, U of Michigan; François Zourabichvili, Collége International de Philosophie.Gregory Flaxman is a doctoral student in the Program of Comparative Literature and Literary Theory at the University of Pennsylvania.