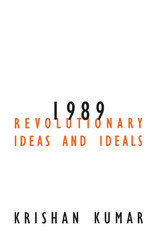 In 1989, from East Berlin to Budapest and Bucharest to Moscow, communism was falling. The walls were coming down and the world was being changed in ways that seemed entirely new. The conflict of ideas and ideals that began with the French Revolution of 1789 culminated in these revolutions, which raised the prospects of the "return to Europe" of East and Central European nations, the "restarting of their history," even, for some, the "end of history." What such assertions and aspirations meant, and what the larger events that inspired them mean-not just for the world of history and politics, but for our very understanding of that world-are the questions Krishan Kumar explores in 1989.

A well-known and widely respected scholar, Kumar places these revolutions of 1989 in the broadest framework of political and social thought, helping us see how certain ideas, traditions, and ideological developments influenced or accompanied these movements-and how they might continue to play out. Asking questions about some of the central dilemmas facing modern society in the new century, Kumar offers critical insight into how these questions might be answered and how political, social, and historical ideas and ideals can shape our destiny.