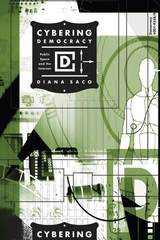 The Internet has been billed by some proponents as an "electronic agora" ushering in a "new Athenian age of democracy." That assertion assumes that cyberspace's virtual environment is compatible with democratic practice. But the anonymous sociality that is intrinsic to the Internet seems at odds with theories of democracy that presuppose the possibility, at least, of face-to-face meetings among citizens. The Internet, then, raises provocative questions about democratic participation: Must the public sphere exist as a physical space? Does citizenship require a bodily presence?

In Cybering Democracy, Diana Saco boldly reconceptualizes the relationship between democratic participation and spatial realities both actual and virtual. She argues that cyberspace must be viewed as a produced social space, one that fruitfully confounds the ordering conventions of our physical spaces. Within this innovative framework, Saco investigates recent and ongoing debates over cryptography, hacking, privacy, national security, information control, and Internet culture, focusing on how different online practices have shaped this particular social space. In the process, she highlights fundamental issues about the significance of corporeality in the development of civic-mindedness, the exercise of citizenship, and the politics of collective action.

Diana Saco is an independent scholar based in Fort Lauderdale, Florida.