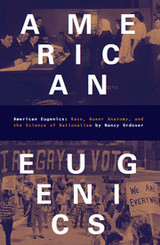 Traces the history of eugenics ideology in the United States and its ongoing presence in contemporary life.

The Nazis may have given eugenics its negative connotations, but the practice--and the "science" that supports it--is still disturbingly alive in America in anti-immigration initiatives, the quest for a "gay gene," and theories of collective intelligence. Tracing the historical roots and persistence of eugenics in the United States, Nancy Ordover explores the political and cultural climate that has endowed these campaigns with mass appeal and scientific legitimacy.

American Eugenics demonstrates how biological theories of race, gender, and sexuality are crucially linked through a concern with regulating the "unfit." These links emerge in Ordover's examination of three separate but ultimately related American eugenics campaigns: early twentieth-century anti-immigration crusades; medical models and interventions imposed on (and sometimes embraced by) lesbians, gays, transgendered people, and bisexuals; and the compulsory sterilization of poor women and women of color. Throughout, her work reveals how constructed notions of race, gender, sexuality, and nation are put to ideological uses and how "faith in science" can undermine progressive social movements, drawing liberals and conservatives alike into eugenics-based discourse and policies.

"In this compact, far-ranging cultural critique, Ordover invites us to make connections between anti-immigrant panics, sterilization campaigns and the search for the genetic roots of sexual desire. Eugenics, she argues, is like a â€˜scavenger' that collects and exploits anxieties about national identity, consigning the politically disenfranchised to the garbage dump. It uses the value-free language of â€˜science' and â€˜public health' to mask its political agenda." --Los Angeles Times Book Review

Nancy Ordover is an independent scholar who lives in New York City.