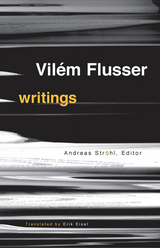 Ten years after his death, Vilém Flusser’s reputation as one of Europe’s most original modern philosophers continues to grow. Increasingly influential in Europe and Latin America, the Prague-born intellectual’s thought has until now remained largely unknown in the English-speaking world. His innovative writings theorize—and ultimately embrace—the epochal shift that humanity is undergoing from what he termed "linear thinking" (based on writing) toward a new form of multidimensional, visual thinking embodied by digital culture. For Flusser, these new modes and technologies of communication make possible a society (the "telematic" society) in which dialogue between people becomes the supreme value.The first English-language anthology of Flusser’s work, this volume displays the extraordinary range and subtlety of his intellect. A number of the essays collected here introduce and elaborate his theory of communication, influenced by thinkers as diverse as Martin Buber, Edmund Husserl, and Thomas Kuhn. While taking dystopian, posthuman visions of communication technologies into account, Flusser celebrates their liberatory and humanizing aspects. For Flusser, existence was akin to being thrown into an abyss of absurd experience or "bottomlessness"; becoming human required creating meaning out of this painful event by consciously connecting with others, in part through such technologies. Other essays present Flusser’s thoughts on the future of writing, the revolutionary nature of photography, the relationship between exile and creativity, and his unconventional concept of posthistory. Taken together, these essays confirm Flusser’s importance and prescience within contemporary philosophy.Vilém Flusser (1920–1991) was born in Prague and taught philosophy in Brazil. Andreas Ströhl is director of the film department at the Goethe-Institut Inter Nationes in Munich. Erik Eisel works for a software technology company in Southern California.