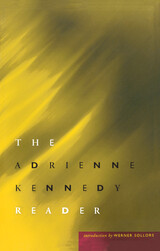 An essential collection of works by one of our greatest living playwrights.

Adrienne Kennedy has been a force in American theatre since the early 1960s, influencing generations of playwrights with her hauntingly fragmentary lyrical dramas. Exploring the violence racism visits upon people's lives, Kennedy's plays express poetic alienation, transcending the particulars of character and plot through ritualistic repetition and radical structural experimentation. Frequently produced, read, and taught, they continue to hold a significant place among the most exciting dramas of the past fifty years.

This first comprehensive collection of her most important works traces the development of Kennedy's unique theatrical oeuvre from her Obie-winning Funnyhouse of a Negro (1964) through significant later works such as A Movie Star Has to Star in Black and White (1976), Ohio State Murders (1992), and June and Jean in Concert, for which she won an Obie in 1996. The entire contents of Kennedy's groundbreaking collections In One Act and The Alexander Plays are included, as is her earliest work "Because of the King of France" and the play An Evening with Dead Essex (1972). More recent prose works "Secret Paragraphs about My Brother," "A Letter to Flowers," and "Sisters Etta and Ella" are fascinating refractions of the themes and motifs of her dramatic works, even while they explore new material on teaching and writing. An introduction by Werner Sollors provides a valuable overview of Kennedy's career and the trajectory of her literary development.

"Kennedy's plays are strong dreams that reveal us in our most vulnerable moments." Robert Brustein, director of the American Repertory Theater

"There are times when we see plays that are so extraordinary-out of this world- we are literally shaken out of our everyday selves. There are greater things in heaven and hell, we realize, and this feeling of 'bigger things' does not easily leave us. The achievement of Adrienne Kennedy's plays is that they hurl us into another place, like a dark stream of consciousness in the blackest of worlds." New York Observer

"For four decades Kennedy has been writing the most intensely personal plays of any playwright in the USA, yet to call them autobiographical is misleading. They are about her and not about her, and this paradox gives her work a power, an intimacy, and a truthfulness that few others achieve. . . . Kennedy's works are dream plays, lyrical explorations of a troubled consciousness, female and black, often divided against itself and at odds with the world around it." Boston Phoenix

"Adrienne Kennedy is one of the black female doyennes of theater, where she has become a role model for a younger generation." New York Times

Adrienne Kennedy (b. 1931) is a three-time Obie-award winning playwright whose works have been widely anthologized and performed around the world. Among her many honors are the Guggenheim fellowship and the American Academy of Arts and Letters award.
TABLE OF CONTENTS