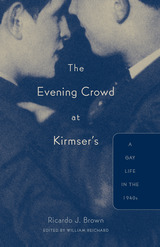 A surprising and vivid remembrance of gay life in the wake of World War II.

For many, it is often difficult to imagine gay gathering places in the decades before the Stonewall riots of the 1960s, and nearly impossible to think of such communities outside the nation's largest cities. Yet such places did exist, and their histories tell amazing stories of survival and the struggle for acceptance and self-respect. When Ricardo J. Brown died in 1999, he left a compelling memoir of his youth and experiences as a young gay man in St. Paul. After being discharged from the navy for revealing his sexual orientation to a commanding officer in 1945, Brown returned to his hometown with a new self-awareness and a desire to find a group of people like himself. He discovered such a place in Kirmser's.

A small neighborhood bar owned by a German immigrant couple in St. Paul's downtown, Kirmser's served working-class customers during daylight hours, but became an unofficial home to the gay men and lesbians who gathered there nightly in the years following World War II. The Evening Crowd at Kirmser's introduces us to often humorous but frequently tragic stories of those who would become the author's friends: Flaming Youth, a homely, sardonic man who carried the nickname from his younger years ironically into middle age; Bud York, the "All-American Boy," who seduced all with his wholesome good looks and confidence; Dickie Grant, a likable, gentle boy who is arrested for writing bad checks and is murdered while in prison; and Dale, the author's best friend, who suddenly loses his job of six years after an anonymous note informed his employer that he is gay.

A revealing look at the origins of gay culture in a mid-sized city and among working-class people, The Evening Crowd at Kirmser's is destined to become a rare and unique classic.

"This posthumous memoir is by a GI who, after being discharged from the navy for his homosexuality in the 1940s, returned to his hometown, St. Paul, Minnesota, where he became part of the community centered on a gay bar." --Washington Post Book World

"Brown colorfully if sparingly depicts the claustrophobic atmosphere of one seedy, ill-kept workingman's bar, heterosexual by day and gay by night. Kirmser's itself is the major character in this lively, intimate book." --Gay & Lesbian Review

"Here is a look at a St. Paul that has seldom been documented, and at a moment in gay history that is usually shrouded in silence. Those who experienced the history had so much to lose if they were exposed." --City Pages

"A fascinating and engaging memoir of post-WWII, pre-Stonewall gay life. Remarkable because of its compactness, its commitment to detail, and its attention to the emotions of people living in a sexual police state." --Rain Taxi Review of Books

"The Evening Crowd at Kirmser's is a reminder of how life was in the bad old days; and warning that we must do all we can to keep them from coming back." --The Weekly News

"Whimsical, insightful, and compellingly readable, Ricardo Brown's memoir offers a remarkable portrait of the life gay men built for themselves after the Second World War in small cities far from the coastal meccas of gay life. A fascinating portrait of working class gay male life in the postwar period."

A lifelong journalist, Ricardo J. Brown (1927-1999) was born in Stillwater, Minnesota. During his long career, he worked as a court reporter for the Alabama Journal, court reporter and sports editor for the Fairbanks Daily News Mirror of Alaska, and as the Minneapolis bureau chief for Fairchild Publications.

William Reichard is a poet and fiction writer, and author of An Alchemy in the Bones (1999).