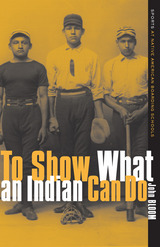 The Carlisle Indian School and the Haskell Institute in Kansas were among the many federally operated boarding schools enacting the U.S. government's education policy toward Native Americans from the late nineteenth to the mid-twentieth century, one designed to remove children from familiar surroundings and impose mainstream American culture on them. To Show What an Indian Can Do explores the history of sports programs at these institutions and, drawing on the recollections of former students, describes the importance of competitive sports in their lives. Author John Bloom focuses on the male and female students who did not typically go on to greater athletic glory but who found in sports something otherwise denied them by the boarding school program: a sense of community, accomplishment, and dignity.
AUTHOR BIOGRAPHY
John Bloom is author of A House of Cards: Baseball Card Collecting and Popular Culture (Minnesota, 1997).
TABLE OF CONTENTS