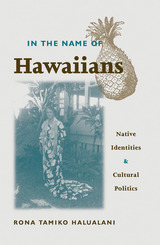 A critical and personal inquiry into the historical factors behind Hawaiian identity.

Deep within the historical imagination, there lies the image of a Western explorer surrounded by dark and strange natives. In the modern and postmodern spaces of tourism, one finds the reflections of an antiquated nativism that is already dead, however commercially viable. And in the statutes of the State of Hawaii, the Aloha Spirit is codified into the ideology of multiculturalism. Where, among the multiple representations and constructions of what is "Hawaiian," is Hawaiian identity actually lived?

Rona Tamiko Halualani analyzes the diverse formations and practices of Hawaiian identity and sociality, on the U.S. mainland as well as on the islands, across several interrelated contexts: museum culture, explorer journals, maps, tourism, census technology, blood quantum mandates, neocolonial administration, and lived community practice. Halualani shows how these contexts represent larger forces from different historical moments that significantly changed the social relations surrounding Hawaiians, the ways in which they have been identified, and how they make sense of who they are. Throughout she interweaves the countering narratives and practices by indigenous Hawaiians as they seek the authorization of their identities, land rights, and culture.