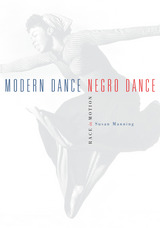 At the New School for Social Research in 1931, the dance critic for the New York Times announced the arrival of modern dance, touting the “serious art” of such dancers as Mary Wigman, Martha Graham, and Doris Humphrey. Across town, Hemsley Winfield and Edna Guy were staging what they called “The First Negro Dance Recital in America,” which Dance Magazine proclaimed “the beginnings of great and important choreographic creations.” Yet never have the two parallel traditions converged in the annals of American dance in the twentieth century.Modern Dance, Negro Dance is the first book to bring together these two vibrant strains of American dance in the modern era. Susan Manning traces the paths of modern dance and Negro dance from their beginnings in the Depression to their ultimate transformations in the postwar years, from Helen Tamiris’s and Ted Shawn’s suites of Negro Spirituals to concerts sponsored by the Workers Dance League, from Graham’s American Document to the debuts of Katherine Dunham and Pearl Primus, from José Limón’s 1954 work The Traitor to Merce Cunningham’s 1958 dances Summerspace and Antic Meet, to Ailey’s 1960 masterpiece Revelations.Through photographs and reviews, documentary film and oral history, Manning intricately and inextricably links the two historically divided traditions. The result is a unique view of American dance history across the divisions of black and white, radical and liberal, gay and straight, performer and spectator, and into the multiple, interdependent meanings of bodies in motion. Susan Manning is associate professor of English, theater, and performance studies at Northwestern University. She is the author of Ecstasy and the Demon: Feminism and Nationalism in the Dances of Mary Wigman, winner of the 1994 de la Torre Bueno Prize for the year’s most important contribution to dance studies.
TABLE OF CONTENTS