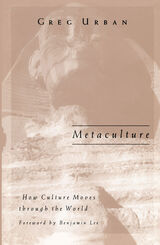 It is one thing to comprehend how culture makes its way through the world in those cases where something old is reproduced in the same physical shape-where, for example, a song is sung or a story retold. It is another thing altogether, as Greg Urban demonstrates, to think about cultural motion when something new is created-a new song or a new story. And this, the creating of new culture, is the overarching value of the contemporary world, as well as the guiding principle of the capitalist entrepreneur.

From the Declaration of Independence to the movie Babe, from the Amazon River to the film studio, from microscopic studies of the words making up myths and books to the large-scale forces of conquest, conversion, and globalization that drive history, Urban follows the clues to a startling revelation: "metaculture" makes the modern, entrepreneurial form of culture possible. In Urban’s work we see how metaculture, in its relationship to newness, explains the peculiar shape of modern society and its institutions, from the prevalence of taste and choice to the processes of the public sphere, to the centrality of persuasion and hegemony within the nation.