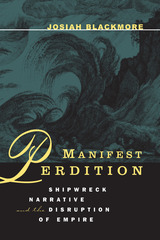 A new take on a famous collection of shipwreck narratives that places them at the center of resistance to colonialism.

Shipwreck, death, and survival; terror, hunger, and salvation-these are the experiences of the passengers onboard merchant Portuguese ships sailing the high seas in the sixteenth and seventeenth centuries. And this is the stuff of the stories committed to print by survivors upon their return to the homeland. These Portuguese shipwreck narratives, rescued for all time in the eighteenth century by Bernardo Gomes de Brito in HistÃ³ria TrÃ¡gico-MarÃ­tima (1735-36), or The Tragic History of the Sea, are the subject of Manifest Perdition, a work that reveals their important-and until now, largely ignored-place in literary history.

In this book we see how the dramatic, compelling, and often gory accounts of shipwreck, depicting a world out of control, challenge state-sponsored versions of events in the prevailing historiographic culture. Written during the heyday of Iberian maritime expansion and colonialism, the shipwreck narrative builds an alternative historical record to the vision and reality of empire elaborated by the official chroniclers of the realm. Manifest Perdition presents both theoretical considerations this genre and close readings of several texts, readings that disclose a poetics of the shipwreck text, of how survivors characteristically yet multifariously narrated their world.

Included is a study of the medieval Iberian poetic predecessors of the shipwreck tale, as well as an exploration of the Portuguese Inquisition's attempt to commandeer and steer the reading of the unruly narratives. The book engages issues of literary theory, historiography, and colonialism to portray the Portuguese shipwreck narrative for the first time as both a product of and a resistance to the prolific culture of sixteenth- and seventeenth-century expansionist history.

Josiah Blackmore is associate professor of Portuguese at the University of Toronto. He is the coeditor (with Gregory S. Hutcheson) of Queer Iberia: Sexualities, Cultures, and Crossings from the Middle Ages to the Renaissance (1999) and editor of a new edition of The Tragic History of the Sea by C. R. Boxer (2001).
TABLE OF CONTENTS