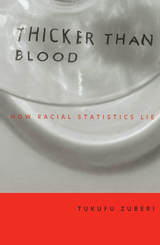 A clear explanation and provocative look at the impact of new technologies on world society.

In our complex and multicultural society, racial identity is often as much a matter of family background, economic opportunity, and geographic location as it is determined by skin color or hair texture. And yet study after study is released and reported in the media regarding African American test scores, Asian American social mobility, and the white domination of our political institutions. In short, there is a fundamental disconnect between the nuanced understanding many people have of race and the ways it is studied and quantified by researchers.

In this timely and hard-hitting volume, Tukufu Zuberi offers a concise account of the historical connections between the development of the idea of race and the birth of social statistics. Zuberi describes the ways race-differentiated data is misinterpreted in the social sciences and asks essential questions about the ways racial statistics are used: What is the value of knowing the income disparities or differences in crime and incarceration rates, differences in test scores, infant mortality rates, abortion frequencies, or choices of sexual partner between different racial groups? When these data are available, what should the principles be guiding their dissemination, interpretation, and analysis? How does the availability of this information shape public discourse, alter scientific research agendas, inform political decision making, and ultimately influence the very social meaning of racial difference?

When statistics are interpreted in a racist manner, no matter how inadvertent the racism may be, the public is exposed to seemingly neutral information that in its effect is anything but neutral. Zuberi argues that statistical analysis can and must be deracialized, and that this deracialization is essential to the goal of achieving social justice for all. He concludes by putting forward a principle of racially conscious social justice, offering an incendiary and necessary correction to the inaccuracies that have plagued this topic at the center of American life.

"Zuberi, who was named one of Philadelphia's 76 smartest people by Philadelphia Magazine, has written a brilliant new book, Thicker Than Blood. One of the most powerful claims of the book is that instead of being a fixed biological reality, race is instead a socially produced phenomenon. His point is to show just how vicious-especially through the use of statistics-the notion of race has been when it has been employed to protect the interest of those in power (whites), especially those who say that because race does not exist, racism is not real." Michael Eric Dyson in The Chicago Sun-Times

"A call to action and, Zuberi hopes, a precursor to a conversation about the real meaning of race, ethnicity, and political power in America." Time Magazine

"Tukufu Zuberi's critical assessment of the analysis of racial data in Thicker Than Blood is a tour de force. His discussion and evaluation of the use of racial statistics in historical and cross-cultural contexts is original and important. I strongly feel that all students and scholars in

Tukufu Zuberi is professor of sociology and director of the African Census Analysis Project at the University of Pennsylvania. He is the author of Swing Low, Sweet Chariot (1995).
TABLE OF CONTENTS