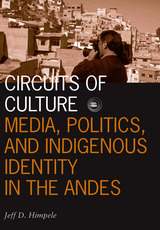 Set against the background of Bolivia’s prominent urban festival parades and the country’s recent appearance on the front lines of antiglobalization movements, Circuits of Culture is the first social analysis of Bolivian film and television, their circulation through the social and national landscape, and the emergence of the country’s indigenous video movement.

At the heart of Jeff Himpele’s examination is an ethnography of the popular television program, The Open Tribunal of the People. The indigenous and underrepresented majorities in La Paz have used the talk show to publicize their social problems and seek medical and legal assistance from the show’s hosts and the political party they launched. Himpele studies the program in order to identify the possibilities of the mass media as a site for political discourse and as a means of social action.

Charting as well the history of Bolivia’s media culture, Himpele perceptively investigates cinematic media as sites for understanding the modernization of Bolivia, its social movements, and the formation of indigenous identities, and in doing so provides a new framework for exploring the circulation of culture as a way of creating publics, political movements, and producing media.

Jeff D. Himpele is associate director for the McGraw Center for Teaching and Learning at Princeton University. He is an anthropologist and documentary filmmaker; his films include the award-winning Incidents of Travel in Chichen Itza and Taypi Kala: Six Visions of Tiwanaku.