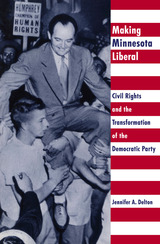 Making Minnesota Liberal: Civil Rights And The Transformation Of The Democratic Party
by Jennifer A. Delton
University of Minnesota Press, 2002
Cloth: 978-0-8166-3922-9
The surprising story of how Minnesota politicians helped redirect the course of American politics.

How did a largely white state like Minnesota become a springboard for leadership in civil rights? Why did it produce a generation of liberals-Hubert Humphrey, Walter Mondale, Donald Fraser, Orville Freeman, and Eugene McCarthy-whose ideals transformed the Democratic Party?

In Making Minnesota Liberal, Jennifer A. Delton delves into the roots of Minnesota politics for the answer, tracing the change from the regional, third-party, class-oriented politics of the Farmer-Labor Party to the national, two-party, pluralistic liberalism of the Democratic-Farmer-Labor Party (DFL). While others have examined how anticommunism and the Cold War shaped this transformation, Delton takes a new approach, showing the key roles played by antiracism and the civil rights movement. In telling this story, Delton contributes to our understanding not only of Minnesota's political history but also of the relationship between antiracism and American politics in the twentieth century.

Making Minnesota Liberal combines political history with a discussion of the symbolic role played by race in political battles between whites. Delton recounts the creation of Minnesota's Farmer-Labor Party, its merger with the Democrats, and the acrimonious battle for control of the DFL just after World War II. She argues that the Humphrey liberals won this battle in part because antiracism activities enabled previously antagonistic groups, divided by ethnicity, religion, and class, to unify around a common cause.

Delton contends that although liberal Minnesotans' concern for racial justice was genuine, it also provided them with national political relevance and imbued their bid for power with a sense of morality. Ultimately the language of tolerance and diversity that emerged from antiracism prepared Minnesotans for Humphrey's vision of a pluralistic and state-centered liberalism, which eventually became the model for Democratic politics nationwide. Making Minnesota Liberal is an absorbing and trenchant account of a key moment in American history, one that continues to resonate in our time.

Jennifer A. Delton is assistant professor of history at Skidmore College.
TABLE OF CONTENTS