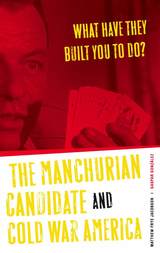 Considered by many to be the best political thriller ever made, The Manchurian Candidate is as entertaining, troubling, and relevant today as it was in 1962. Starring Frank Sinatra, Laurence Harvey, and Angela Lansbury, and directed with probing insight by John Frankenheimer, the film was widely acclaimed as a masterpiece. Largely out of circulation for the next two decades, it acquired a well-deserved cult following until it was rereleased during the last year of the Reagan presidency, when its pointed satire of political and media manipulation seemed more timely than ever. In What Have They Built You to Do?—a key line of dialogue from the original film—Matthew Frye Jacobson and Gaspar González undertake an ambitious reexamination of The Manchurian Candidate, the 1959 novel by Richard Condon on which it was based, and—critically analyzed here for the first time—the 2004 remake directed by Jonathan Demme. Based on close readings of the film and broad investigations into the eras in which it was made and rediscovered, the authors decode the many layers of meaning within and surrounding the film, from the contradictions of the Cold War it both embodies and parodies—McCarthyism and Kennedy liberalism, individualism and conformity—to its construction of Asian villains, overbearing women, and male heroes in a society anxious about race, gender, and sexuality. Through their multifaceted analysis of The Manchurian Candidate (in all its incarnations), Jacobson and González raise provocative questions about power and anxiety in American politics and society from the Cold War to today.Matthew Frye Jacobson teaches American studies at Yale University. His books include Roots Too: White Ethnic Revival in Post–Civil Rights America. Gaspar González is an independent scholar and journalist in Miami. He has taught American studies at Yale University and film studies at the University of Miami.
TABLE OF CONTENTS