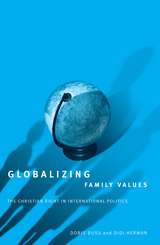 A timely exposÃ© of the efforts of the religious right to influence global policy.

Doris Buss and Didi Herman explore tensions, contradictions, victories, and defeats for the Christian Right's global project, particularly in the United Nations. The authors consult Christian Right materials, from pamphlets to novels; conduct interviews with people in the movement; and provide a firsthand account of the World Congress of Families II in 1999, a key event in formulating Christian Right global policy and strategy.

The result is a detailed look at a new global player-its campaigns against women's rights, population policy, and gay and lesbian rights; its efforts to build an alliance of orthodox faiths with non-Christians; and the tensions and strains as it seeks to negotiate a role for conservative Christianity in a changing global order.