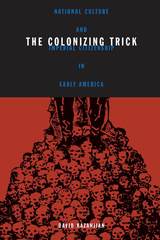 An illuminating look at the concepts of race, nation, and equality in eighteenth- and nineteenth-century America.

The idea that "all men are created equal" is as close to a universal tenet as exists in American history. In this hard-hitting book, David Kazanjian interrogates this tenet, exploring transformative flash points in early America when the belief in equality came into contact with seemingly contrary ideas about race and nation. The Colonizing Trick depicts early America as a white settler colony in the process of becoming an empire--one deeply integrated with Euro-American political economy, imperial ventures in North America and Africa, and pan-American racial formations.

Kazanjian traces tensions between universal equality and racial or national particularity through theoretically informed critical readings of a wide range of texts: the political writings of David Walker and Maria Stewart, the narratives of black mariners, economic treatises, the personal letters of Thomas Jefferson and Phillis Wheatley, Charles Brockden Brown's fiction, congressional tariff debates, international treaties, and popular novelettes about the U.S.-Mexico War and the YucatÃ¡n's Caste War. Kazanjian shows how emergent racial and national formations do not contradict universalist egalitarianism; rather, they rearticulate it, making equality at once restricted, formal, abstract, and materially embodied.