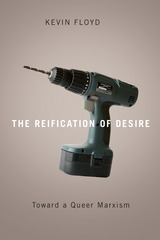 The Reification of Desire takes two critical perspectives rarely analyzed together—formative arguments for Marxism and those that have been the basis for queer theory—and productively scrutinizes these ideas both with and against each other to put forth a new theoretical connection between Marxism and queer studies.

Kevin Floyd brings queer critique to bear on the Marxian categories of reification and totality and considers the dialectic that frames the work of Georg Lukács, Herbert Marcuse, and Fredric Jameson. Reading the work of these theorists together with influential queer work by such figures as Michel Foucault and Judith Butler, and alongside reconsiderations of such texts as The Sun Also Rises and Midnight Cowboy, Floyd reformulates these two central categories that have been inseparable from a key strand of Marxist thought and have marked both its explanatory power and its limitations. Floyd theorizes a dissociation of sexuality from gender at the beginning of the twentieth century in terms of reification to claim that this dissociation is one aspect of a larger dynamic of social reification enforced by capitalism.

Developing a queer examination of reification and totality, Kevin Floyd ultimately argues that the insights of queer theory require a fundamental rethinking of both.
AUTHOR BIOGRAPHY
Kevin Floyd is associate professor of English at Kent State University.