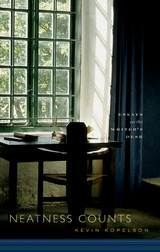 In Neatness Counts, Kevin Kopelson reflects on the poetics of the desk—rolltop or bureau-plat, cluttered or bare, the nestlike desk, the schematic desk, the dramatic desk, the dramatic lack of any such furniture. Exploring the topography of literary creation by way of the topography of work space, Kopelson, one of today’s most important critics, offers a series of meditations on how orderliness, chaos, and other physical states correspond with both the exhilaration of production and the desperation of writer's block.Focusing on the poet Elizabeth Bishop, the novelist Marcel Proust, the critic Roland Barthes, the playwright Tom Stoppard, and the travel writer Bruce Chatwin, Neatness Counts is at once critical and creative, examining how various writers' work habits relate to their published work. Kopelson also considers desks of his own—one that had belonged to an older brother, one he borrowed from a messy friend, one now shared with a partner. And by pursuing these two lines of inquiry to their unlikely but enlightening conclusions, Kopelson both fabricates a virtual library of literary insight and commemorates an era in which the term “desktop” didn’t denote one’s computer screen.Kevin Kopelson is professor of English at the University of Iowa. His books include, most recently, The Queer Afterlife of Vaslav Nijinsky.
TABLE OF CONTENTS