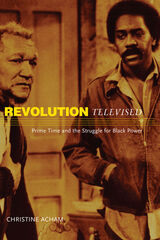 After a decadelong hiatus, African Americans once again began appearing regularly on television in the 1960s. Bill Cosby costarred on I Spy, Sammy Davis Jr. briefly hosted a variety show, and in 1968 Diahann Carroll debuted in the title role of Julia, the first television series to star an African American since the cancellation of Amos ’n’ Andy. Over the next ten years, shows with African American casts became more common; some, like Sanford and Son and Good Times, were hits with both black and white audiences. Yet many within the black community criticize these programs as perpetuating demeaning stereotypes and hampering the political progress made by African Americans.

In Revolution Televised, Christine Acham offers a more complex reading of this period in African American television history, finding within these programs opposition to dominant white constructions of African American identity. She explores the intersection of popular television and race as witnessed from the documentary coverage of the civil rights and Black Power movements, the personal politics of Flip Wilson and Soul Train’s Don Cornelius, and the ways in which notorious X-rated comic Redd Foxx reinvented himself for prime time.

Reflecting on both the potential of television to effect social change as well as its limitations, Acham concludes with analyses of Richard Pryor’s politically charged and short-lived sketch comedy show and the success of outspoken comic Chris Rock. Revolution Televised deftly illustrates how black television artists operated within the constraints of the television industry to resist and ultimately shape the mass media’s portrayal of African American life.

Christine Acham is assistant professor in African American and African studies at the University of California, Davis.