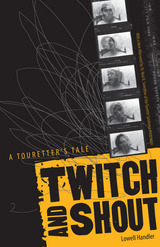 The remarkable memoir of a Touretter’s journey of self-discovery—now back in print!

Lowell Handler has Tourette’s syndrome, a disorder characterized by exaggerated facial tics, sudden jerking movements of the body and limbs, and explosive public outbursts, usually in the form of expletives and racial epithets. Although he is a successful and acclaimed photojournalist, Handler has often seen himself as an outsider—a social outcast.  With courage and candor, he recalls the difficulties he suffered growing up, the confusion he experienced when doctors misdiagnosed his bizarre behavior as a psychological aberration, and finally how, restless and despairing, he embarked on a quest for answers.

In Twitch and Shout, Handler sets out, camera in hand, on a journey through less than savory parts of America.  From a transvestite bar in Tampa to a flophouse in New Orleans to a community health center in New York, he meets a variety of people who, like himself, don’t conform to the standards of conventional society. With a keen eye for detail and an acute sense of humor, this memoir perfectly captures the unique and unforgettable life of a Touretter.
AUTHOR BIOGRAPHY
Lowell Handler is a photojournalist whose work has been published in, among others, Life, Newsweek, U.S. News and World Report, and the Sunday Times Magazine (London).  He served as associate producer and narrator of the Emmy-nominated PBS documentary Twitch and Shout, an exploration of Tourette’s syndrome.  He he is on the tenured faculty of the Department of Performing, Visual Arts, and Communications at Dutchess Community College in Poughkeepsie, NY.