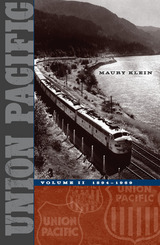 Union Pacific: Volume II, 1894-1969
by Maury Klein
University of Minnesota Press, 2006
Paper: 978-0-8166-4460-5
The second volume in the history of the Union Pacific begins after the financial panic of 1893, one of the worst depressions Americans had yet experienced, which pushed the railroad into bankruptcy. Maury Klein examines the complex challenges faced by the Union Pacific in the new century—the expanding role of government and its restrictive regulations, the growth of labor unions, the devastating effects of two world wars, and the growing competition from new modes of transportation—and how, under the innovative and influential leadership of Edward H. Harriman, the Union Pacific again played the role of industrial pioneer. Union Pacific has remained one of the strongest railroads in the country, surviving the eras of government regulation and the corporate mergers of the past twenty-five years. Insightful, definitive in scope, rich in colorful anecdotes and superb characterizations, Union Pacific is a fascinating saga not only of a particular railroad but also about how that industry transformed America.Maury Klein is professor of history at the University of Rhode Island. He is the author of several books, including the Pulitzer Prize finalist The Life and Legend of Jay Gould.
TABLE OF CONTENTS