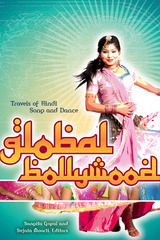 Bollywood movies and their signature song-and-dance spectacles are an aesthetic familiar to people around the world, and Bollywood music now provides the rhythm for ads marketing goods such as computers and a beat for remixes and underground bands. These musical numbers have inspired scenes in Western films such as Vanity Fair and Moulin Rouge.

Global Bollywood shows how this currency in popular culture and among diasporic communities marks only the latest phase of the genre’s world travels. This interdisciplinary collection describes the many roots and routes of the Bollywood song-and-dance spectacle. Examining the reception of Bollywood music in places as diverse as Indonesia and Israel, the essays offer a stimulating redefinition of globalization, highlighting the cultural influence of Hindi film music from its origins early in the twentieth century to today.

Sangita Gopal is assistant professor of English at the University of Oregon. Sujata Moorti is professor of women’s and gender studies at Middlebury College.