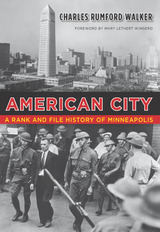 American City: A Rank and File History of Minneapolis
by Charles Rumford Walker
foreword by Mary Lethert Wingerd
University of Minnesota Press, 2005
Paper: 978-0-8166-4607-4
In the spring of 1934, a small group of militant union organizers led Minneapolis truckers on a series of strikes that sought to break the city's antiunion grip. The striking truckers, in protest of scab workers, took to the streets of the city's warehouse district where they faced violent opposition from the police and members of the Citizen's Alliance, a group representing Minneapolis's business community. The conflict exploded when police fired on the unarmed strikers, killing four and injuring countless others. The events surrounding Bloody Friday shifted the balance of power between labor and business in Minneapolis and proved to be a significant victory for the labor movement nationwide, contributing to the ratification of the landmark National Labor Relations Act. When first published in 1937, Charles Rumford Walker's American City was praised as an evenhanded portrayal of the truckers' strike. Focusing on the personal experiences of the participants, Walker recounts the interests, motives, and passions on both sides of the conflict, capturing the heated emotions of those involved. He offers a vivid account of a period that transformed Minneapolis and forged the way for workers' rights nationwide.
AUTHOR BIOGRAPHY
Charles Rumford Walker (1893-1974) was a journalist, editor, and labor activist He is the author of numerous short stories, plays, articles, and books, including Steel: The Diary of a Furnace Worker. Mary Lethert Wingerd is assistant professor of history at St. Cloud State University. She is the author of Claiming the City: Politics, Faith, and the Power of Place in St. Paul.
TABLE OF CONTENTS


Contents Foreword Mary Lethert Wingerd AcknowledgmentsIntroductionAmerican City The Golden Age of Economic Empire Fate of the Rank-and-File Empire Builders Political Revolt and the War The Farmer-Labor Party in Power 1934: City of Tension The First Challenge Battle in the Streets Personal Lives Civil War in July Three Citizens and the Fate of a City Truce between the Past and the Present Everyday Life The Dynamo of Change Crossroads Selected Bibliography