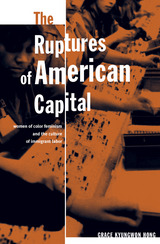 Universality is a dangerous concept, according to Grace Kyungwon Hong, one that has contributed to the rise of the U.S. nation-state that privileges the propertied individual. However, African American, Asian American, and Chicano people experience the same stretch of city sidewalk with varying degrees of safety, visibility, and surveillance.The Ruptures of American Capital examines two key social formations—women of color feminism and racialized immigrant women’s culture—in order to argue that race and gender are contradictions within the history of U.S. capital that should be understood not as monolithic but as marked by its crises. Hong shows how women of color feminism identified ways in which nationalist forms of capital, such as the right to own property, were repressive. The Ruptures of American Capital demonstrates that racialized immigrant women’s culture has brought to light contested modes of incorporation into consumer culture.Interweaving discussion of U.S. political economy with literary analyses (including readings from Booker T. Washington to Jessica Hagedorn) Hong challenges the individualism of the United States and the fetishization of difference that is one of the markers of globalization.Grace Kyungwon Hong is assistant professor of English and Asian American studies at the University of Wisconsin, Madison.
TABLE OF CONTENTS