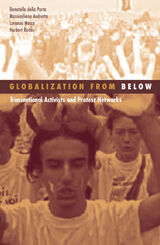 When violence broke out at the demonstrations surrounding the 2001 G8 summit in Genoa, Italy, the authors of this book were there. The protests proved to be a critical moment in the global justice movement.

Presenting the first systematic empirical research on the global justice movement, Globalization from Below analyzes a movement from the viewpoints of the activists, organizers, and demonstrators themselves. The authors traveled to Genoa with anti-G8 protesters and collected data from more than 800 participants. A year later, they surveyed 2,400 activists at the European Social Forum in Florence. To understand how this cycle of global protest emerged, they examine the interactions between challengers and elites, and discuss how these new models of activism fit into current social movement work.

Globalization from Below places the protests within larger debates, revealing and investigating the forces that led to a clash between demonstrators and the Italian government, which responded with violence.